Garden and Blog update and announcement

This year i made good progress on most trees as i could dedicate alot more time to them then in previous years.

Over the next weeks im going to give updates of those already written about as well as presenting new ones.

Also, i will describe 2 of my latest, and, in my opinion, most useful for average bonsai people, DIY projects on a turnable bonsai work table and bonsai benches.


The tree was covered with big and increasingly heavier, due to rain, amounts of snow over the winter. Thus, the main trunks were bent down naturally. I decided that it is an improvement to go for a more leaning design for this cotoneaster. It was not repotted this spring which needs to be adressed next year possibly into a first bonsai pot. Also, the deadwood needs to be taken care of and worked on. This year i started by bending the lowest branch down further and more wireing and cutback will happen this season. The flower buds are swollen which looks pleasing of course with lots of them covering the tree.


The chinese elm is taking small but constant steps forward in its development.
I am pleased with the trunk development and wound healing. The focus lies on the thickening and development of the lower branches and the top. The crown needs to be established and extended especially on the left side when seen from the possible front, as it is also depicted in the pictures. The method of choice is to let lower shoots grow longer before cutback in comparison to the upper branches which are ramified alot more already and might need a more significant cutback this fall.

I managed to sucessfully train 5 of 7 seedlings I started out with in 2014 into what might become bonsai in some years time. They were repotted twice and were just cut back each autumn roughly and branches or leaders were selected in spring and then let grow freely. Most will be trained to be shohin sized trees or just slightly bigger so I will have to do a harder selection on the roots and the trunkline/branches next spring. 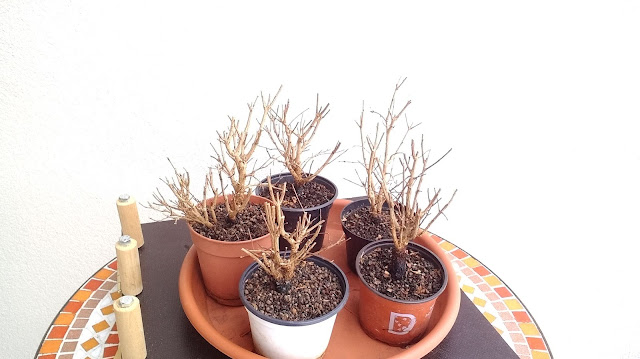 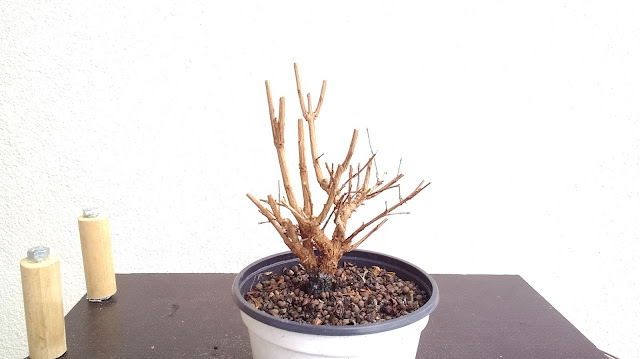 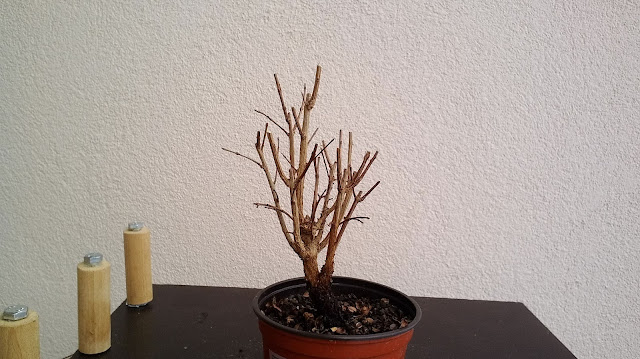 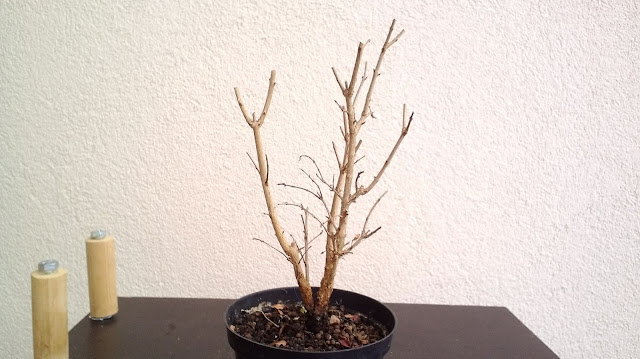 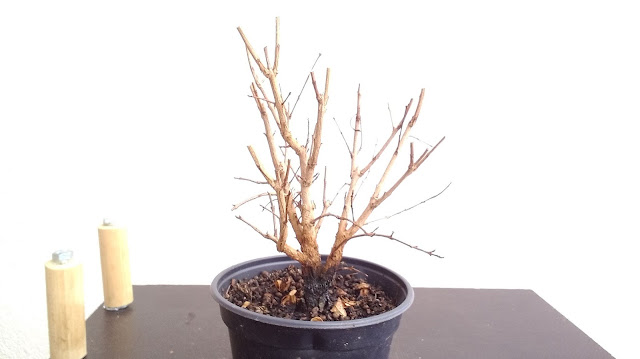 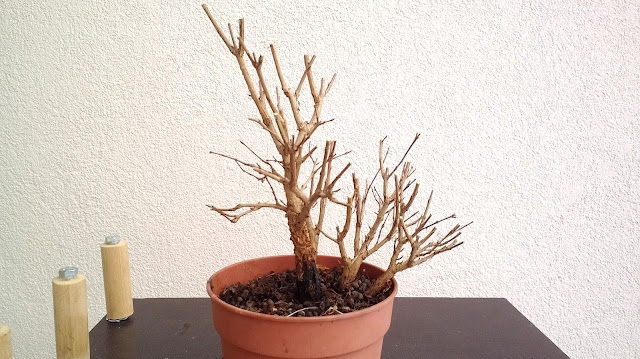 This was the first tree I aquired and its development was therefore quite the opposite of what I would refer to as straightforward. It was wired by me when I bought it, my first wiring I ever did, and almost died a year later when I was still keeping my trees in a super well draining substrate and on the hot, south-faceing balcony. It surprisingly survived these summer days, contrary to some other of my first trees, and I decided to just dig it in the ground to let it recover. It was then field grown for  about 5 years and I just decided to create a rock planting 3 years ago because the shape of the roots was weird already because I never paid too much attention to it. Yes, the stone I took is not particularly interesting for a root-over-rock style and the attachment of the roots is far from perfect. But I am delighted that I managed to create something with a somewhat hopeful future from what was destined to be a failure.
Now Im focusing on creating this inverse taper and let some sacrifying branches grow stongly during the next growing seasons. The roots will also be exposed gradually and I am working on creating a nice, flat rootball. This year was the first after the long time in the field and I think it will make big progress next year. 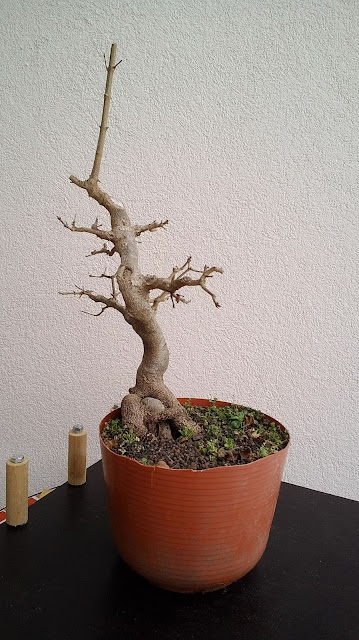 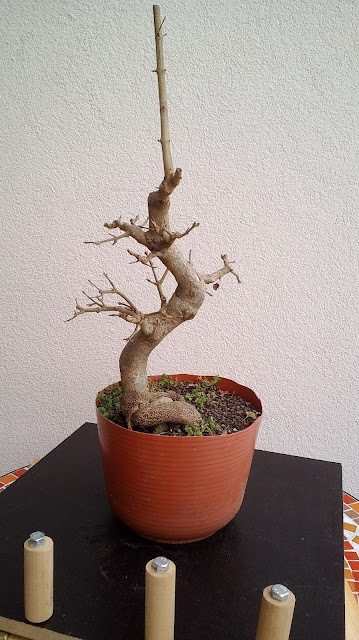 The shoots were cut back throughout the growing season and some decisions were made regarding the branch structure and the arrangement of the main trunks. It resembles a multitrunk tree and the trunks grow from one common base that is quite thick under the soil. Im sure this tree will be interesting and unconventional espacially when thinking of the display with either the white flowers or the red berries. 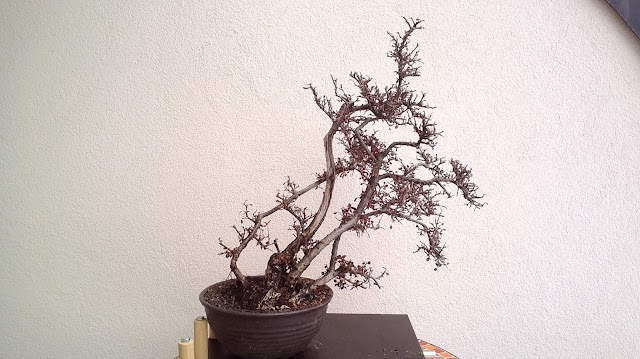 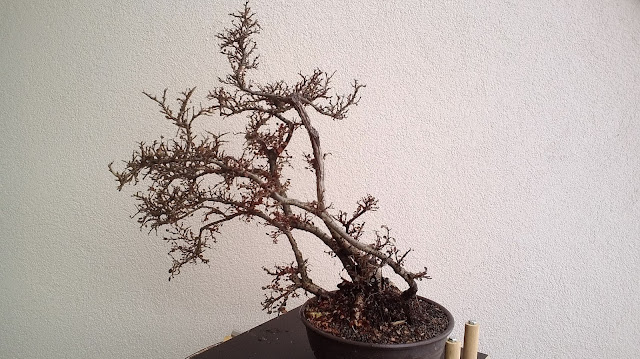 This hawthorn was bought 2014 and is from Italy. The main work I did so far was to reduce a big branch or possibly subtrunk that didnt fit for how I saw the future of the design. I reduced and cut back the branches and repotted it twice. The roots require more attention as there is a fat root while on the other side of the trunk the roots are think and sparse. 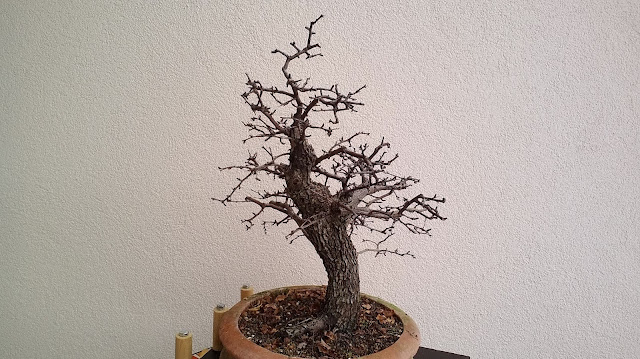 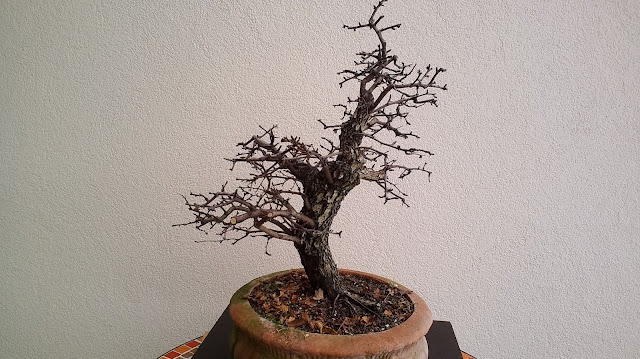